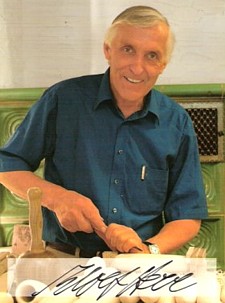 In 1730 Anton Ketterer built the first cuckoo clock. In the 1780´s Adolf Herr´s ancestor, Johann Hiller, already built clocks in the Black Forest. His son in law, Johann Baptist Rainer, born in 1763 continued the clock making tradition. His son in law, Christian Herr, born 1814 was clock maker, too. From then on, the clock making art was handed down from father to son. Bernhard Herr, born 1842, Robert Herr, born 1876, and Rudolf Herr, born 1901, established a family tradition in making fine clocks. Adolf Herr, Rudolf´s son, married to Gerlinde Eble, whose great-grandfather, grandfather, and father had also been clockmakers, opened his own business in 1977 – the House of Black Forest Clocks. He has been creating cuckoo clocks in ever since, inventing new designs and, above all, new movements that have found a new place in many households in Germany and overseas. Adolf Herr does not have a huge factory. He loves working on the carving bench and in his workshop on the third floor of the store. Assisted by his wife, his son, and his daughter Adolf Herr runs a family business in an old family tradition.